lessons from a 14 year old

i was talking to one of my youth last week, discussing the high school dating scene over a cup of coffee (have i mentioned that i love my job?) at one point she said, “every one of my guy friends likes at least 3 girls. they just can’t make up their minds!” she was lamenting the fact that even her boyfriend was into other girls. and i thought, ah, poor high schoolers. they just don’t know what they want. i’m so glad that’s not MY dating scene any longer…

but perhaps i was wrong.

i visited my friend carolyn (and her wonder dog molly!) last friday in chapel hill. we met up with my rock star (literally) friend, alex wilkins, and then went to his gig at a bar across from UNC. it was fun. 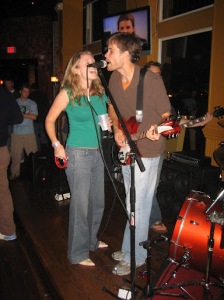 but during the course of the night, a guy named ryan professed that i was his soul mate. maybe this is because we were talking about theology and linguistics in a bar. i mean, it is rare bar talk. but soul mate? and it was especially discouraging, as ryan happens to be ENGAGED. how can an engaged man mistake me for his soul mate? really?

the real kicker was when i came home to find an email from engaged-man-ryan, who i suppose found my email address on my blog, stating that he’s really a very nice and faithful guy, but that he’d like to start up a conversation type relationship with me. over email. and i’ll add that his email address seemed to have been made up, strictly for this purpose. s-k-e-t-c-h-y.

point being… do 14 year olds never grow up?

here i thought the “liking 3 girls at once” problem was reserved to the dramas of high school, but it doesn’t seem to be a safe assumption.

the evening still rocked, though, since i got to see carolyn AND even did an impromptu duet with alex. i’m lovin’ me some tambourine.