don´t cry for me 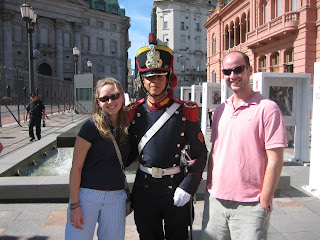 pierce (my not so little bro) and i are in argentina visiting the family i lived with 11 years ago, when i was a mere sophomore in high school. it´s been awesome. my family hasn´t changed a bit. corina (cou… the girl who nick named me lau) married pablo 2 months ago, so that´s different. it´s also the purpose of my trip. we made a pact waaay back to go to each others weddings. i´m just 2 months late. cou and pablo live in a darling house they just built, but they only have their bed and a table and chairs for furniture. pierce and i are sleeping on cots. it´s great.

luisa and ernesto (my argentine parents) live in the exact same house with the exact same furniture. it was crazy to walk into my old room yesterday! like i´ve only been gone 11 days. i love it. and luisa still coddles me as if i were her own baby. she also keeps encouraging me to eat… i´m pretty sure she´s responsible for the 30 lbs i gained when i lived here! that won´t happen again.

some things have changed, though. it´s not quite as safe, mostly because people are less sure of their circumstances, i suppose. i used to be able to walk on my own… now cou get´s nervous at the thought of me running with pierce, though i keep telling her i´ve done much worse.

today we went to the capitol city, buenos aires (cou lives in a suburb about 45 minutes north). we visited la boca (the brightly painted italian slums where the tango orignated) where we people watched for hours as we waited for our lunch to arrive. pierce was excited to split a parilla (meat plate) with pablo. he´s pretty pumped about 10 days of the best red meat in the world. we also went to the plaza de mayo, where we walked the plaza, visited the buenos aires cathedral and the casa rosada (that would be the pink house, like our white house, where evita sang her lovely songs off the balcony in movie life). while at the casa rosada, i conned pierce into taking a picture with me and one of the guards… who, by the way, is smiling because his hand is on my butt. very friendly! then we went to the puerto madero, the old part of town, where we boarded a boat and watched a catholic mass (on the boat) and walked all over. it was a full day.

pablo is a great addition. pierce and i like him a lot. he and cou dated for 8 years before marrying in october, so they´re like best friends. pablo can COOK! he stuffs more food down my throat than luisa. he´s got a great sense of humor, and the 4 of us travel well together.