for the cabbage i just cut one apple, one head of cabbage, and half an onion and sauteed it in some olive oil, salt and pepper over medium heat.  oh, and i added a dash (and i mean dash) of cumin for some kick and a double dash of cinnamon.  it was yummy, but i cut the crap out of my thumb.  it’s healing.

then i made some soup because i needed to finish off our CSA veggies (it’s hard to use them up when jay is working nights).  i’m not sold on any recipe yet, but i’ll just tell you that i sauteed some peppers (including half a habanero), garlic and onions with some spicy turkey sausage.  i added 4 small potatoes and a turnip, diced, then some chicken stock, and then every other veggie i could find (cabbage, tomato, carrots, green beans) and let it simmer half an hour.  by the time my girlfriend farrell came over with a bottle of wine and jay came home with a loaf of crunchy bread, we were set.  the habanero definitely kicked the spice up a notch.

today jay and i went to “the lobster place” at chelsea market and we were totally overwhelmed by the types of fish they offer.  we opted for something mostly prepared–the salmon burgers.  yummy.

at home i chopped up some butternut squash, some other kind of short squatty yellow squash, some cauliflower and a little garlic.  i tossed it with some olive oil, sage, little bit of curry and paprika.  i roasted it all on a cookie sheet at 450F for 40 minutes (i probably could have taken the veggies out at 30 minutes, but jay was on a run, so i let them roast a little longer).  the salmon patties were cooked in a skillet over medium heat for five minutes on either side.  easy peasy. 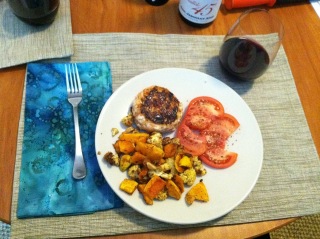 i’m pretty excited we have local tomatoes that still taste like tomatoes in october, so i sliced that up too.  this meal was special enough to break out the place-mats and napkins boriana and julie gave us for our wedding.  and a bottle of wine from william, aerated with our snazzy wine thingy from anna and laurel.  other than accidentally missing yoga (sorry keith), it was a great night.

almost forgot the part about crazies–i was ecstatic when farhan called to say he was visiting a school up here and wanted to crash our living room floor.  oh, how our friends get us through our homesickness!  but towards the end of a great visit, farhan and i were exiting the c-train at 23rd street when some dude in aviators walked up and swung at farhan’s face.  i don’t think farhan dodged the punch, i think the guy just missed… i think maybe he just wanted to scare us?  he definitely scared me.  and the one word that came out of my mouth in that moment was… “GOSH!”  (gosh?  really?)  at which point the guy started yelling at me and threatening to spit in my face.  farhan and i were (and are) totally ok, but like i said, crazy.  it was a total fluke, and i know people that have lived here for years that have never seen such things.  and i know the same could have happened just as easily in charlotte or even little lexington.  nonetheless, jay ordered some pepper spray for me to carry around.  and i will carry it with full knowledge that i’ll likely never have to use it.

so that’s the scoop.  i cooked some veggies, i cut my thumb, i met a crazed dude.

2 thoughts on “cooking, cuts and crazies”